I would like to know that I have left something behind: An Interview with Mr. Stanley 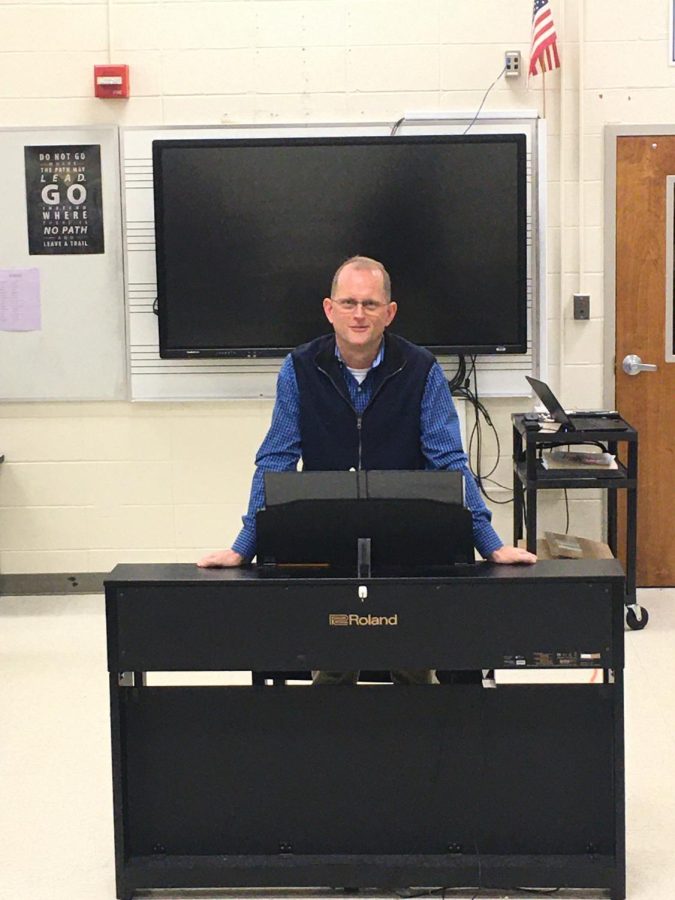 Jim (James) Stanley, also known as Stan to his students, has been the Chorus teacher for 29 years and 26 years at his current school, Cartersville High School. He prides himself in his work and expects nothing but the best from his students. He has the type of personality where you can either love him or hate him, though most students who have had him, love him. He can be one of the most fun and gracious teachers you meet, as long as you do what is needed to be done and do it better than the best. To say Stan is a perfectionist is an understatement. He has a miraculous knowledge, love, and respect for music that could never go unseen.

I want to start from the beginning of your life. Did you grow up in a musical household?

My parents were not that musical. I had relatives… my grandmother’s brother traveled around to different churches, and he taught churches “music schools”, they were called. He taught those at different churches. And of course, I grew up singing in church. But that was pretty much the only music exposure. My parents didn’t really sing so I got it all from church. And I always begged to take piano lessons. Which there was no piano teacher who lived near us so I couldn’t take it until I was in the fifth grade. Our preacher’s daughter graduated from college with a music degree, and she started teaching music lessons. So, I was able to start taking piano lessons finally in the fifth grade.

Yes, I loved it. My parents had to make me stop practicing so that I would do my homework. Cause all I wanted to do was practice piano all the time. All the time.

Who were your musical heroes and are they still your heroes?

My chorus teachers were probably like my biggest examples. And I wasn’t going to take chorus at all until I had some friends that were like “Well you have to get the fine arts credit. You should just sign up and take it for Ninth grade. You could take it one semester.” And that, at the time, you were only required to have half a credit in a fine arts course. So, I was going to take a half semester and I was going to be done. Cause it wasn’t the cool thing to do. So, I joined chorus and then my chorus teacher convinced me to try out for All-State chorus. And I tried out for All-State, and I made it. And she convinced me to stay in second semester so that I could actually go to All-State chorus because it was held in April then. So, I stayed in and went to All-State and my director was the best music director I thought that lived on the planet because… she was amazing. So, on the way home, (I was the only one who made it from my school), and we were driving back (my chorus teacher and I), and my chorus teacher was like, “So did you have fun?” And I was like, “I want to be a music teacher.” My chorus teacher kind of laughed at me and she said, “Well, you’re only in the 9th grade. You’ll probably change your mind before you graduate.” And I never did.

Did you ever want to be anything else before being a music teacher?

While in college, what type of classes did you take?

Your first year when your started being a teacher, where were you?

No. I was actually split between Rome Middle School and Rome High School. And I wanted to be a high school teacher, but in order to take the job; the job was split between middle school and high school. And Rome Middle School and Rome High School were a brand-new schools. It had just opened up. Which at the time I thought it was the most beautiful school that I had ever seen, and I had really wanted to teach there, and it would be so cool to teach there and start up a choral program. So, I went to work there, and I only had one chorus class at the high school, and it only had 14 people in it; and those 14 people were pretty much people that they had just dumped in there cause they didn’t have anywhere else to put them. So, they just put them in this new chorus class that they had started because there was nowhere else to put them; and I was expected to teach them to sing. And in fact, one of those students, I will never forget, left through the fire escape door one day and started walking down the street. And I had to call my assistant principle and tell him that the kid had left school and was walking down the memorial highway. So, my principle and the SRO had to get in the police car and chase him on the road to go pick him back up because he left. I was dealing with that kind of stuff all the time. At the middle school, I had to teach general music class. Which every kid in the school was required to take general music. So, everybody had to come in my room, and I was expected to teach them. It wasn’t chorus class, it was general music class. So, you’re having to teach them stuff besides… singing. And I didn’t want to do that. I wanted to be teaching singing to people who wanted to be able to sing. So, I hated it.

When was the year you felt this is really what you want to do?

When I came to Cartersville, my third-year teaching. My third year was like the magical year.

How did you wind up being a teacher at Cartersville High School?

I was teaching at Rome High School and I did my student teaching here. So, when my supervising teacher [from when he was student teaching] decided, he was going to leave to go to another school, he contacted me and said that he would like to recommend me to take his place here [Cartersville High School]. And I said “Yes! I would love to!” And I moved from Rome to Cartersville.

How was Cartersville compared to Rome?

Well, it was a full choral program. Cartersville at that time had five chorus classes. There were over 200 kids in chorus then. So, I went from having a very small chorus and having to teach over half of my day in general music, to teaching chorus all day. Which is what I wanted. Cause I was actually getting to teach singing then.

Other than your third year what year made you feel that you had the best students and job?

My third year at Cartersville which would’ve been my 5th year teaching. And that is probably the class, the class of ’98, is probably the class that I’ve had more people who have gone on to pursue music than from any other class. Because they were just, they were such strong singers and they all wanted to do something in music with their lives. So, I have not had so many in one class again since then.

How many was it?

Oh, my goodness, I would probably say seven or eight that all wanted to stick with music as they went on through. A couple of them became music teachers.

Has there been a time you wanted to quit at Cartersville?

Mhm. Numerous times. Teachers deal with a lot of adversity. We deal with sometimes disappointments from students, we deal with angry parents, we deal with our own professional let down in terms of expectations of ourselves and what we want out of what we’re doing. And there are sometimes we question is this the right thing if we care doing what we should be doing, if this is the right career. So yeah, early on, there were lots of days that I thought, “Do I want to do this for the rest of my life? Am I making the right choice? Because I don’t want to have to deal with this kind of disappointment forever.” So, you question your decisions early on. And I think a lot of people in a lot of different careers do that. Where they’re just like, “uh, I don’t know.” And you have to kind of reach a place where you’re like, “Yeah, I’ve committed this much of my life to this. This is what I love to do, and I just need to keep holding on; see myself through this.”

How would you describe your love for music?

How would I describe my love for music?… More than the music itself, I love it when my enthusiasm or my passion is contagious and when I can make students love it. Or when I make something happen that students are like, “oh, now I get it!” And they want to be a part of it and want to make it happen and even more all the time. If I can give them an experience that prompts them to want to do it more, to love it more, that’s what my first love is. More than the music itself.

Do you still excited for the concerts to come or are you ready to be done with it all?

What is the most rewarded you have felt from being a music teacher?

I would love to have the same impact on the people that I teach that my all-state teacher had on me and I was like, she is possibly the coolest person ever and I want to do what she’s doing. I mean, if I can spark that kind of love or that kind of enthusiasm for music, this year. That’s what kind of does it for me.

How has music enhanced your life?

When you come upon your last concert, how do you think you are going to feel?

Probably sad because it’s been such an investment for me over the course of the last 29 years. Um, and I think about a lot, you know, everybody kind of wants probably that their life’s work had had meaning and whatever. I would like to… I would like to know that I’ve left something behind. What has my legacy been? What’s goanna be here that’s going to be remembered about Jim Stanley?

So, knowing all that you know now, what would you tell yourself when you first began your career?

Be prepared for change. Because things in education change every day. The clients that you serve change every single year. The time of your classroom will be different every single day based on student’s attitudes and perspectives. Be prepared to have disappointments because students are going to disappoint you, both professionally and personally. And be prepared for kids not to love it [music] as much as you think they should. Because not every student who winds up in your class is going to sing for the rest of their lives. And they’re here simply because they want that grade, and to get a fine arts credit. It’s not that they care about singing as much as you hope they would.