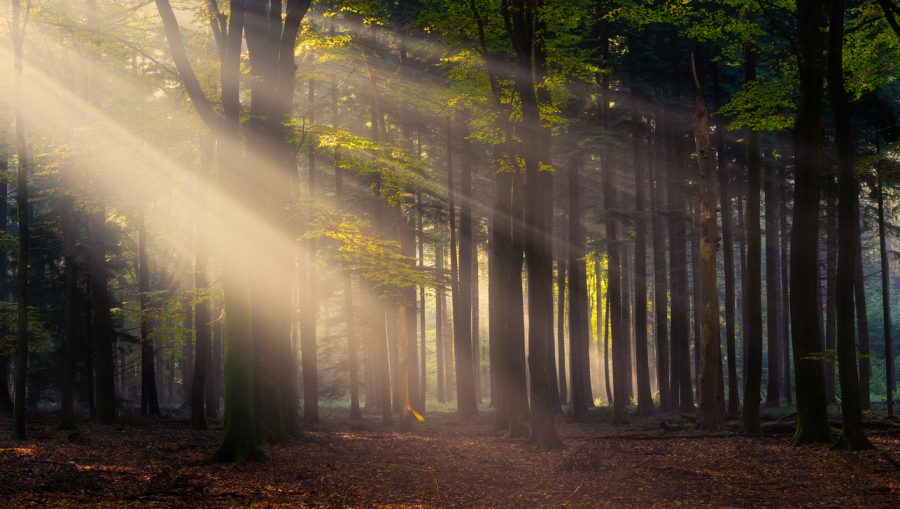 The Forest of Aeytr was one of the most beautiful forests ever made in all of Aertes– and one of the most deadly. It had tall, tall trees that easily towered over everything, with long vines stretching from the high branches down to a fair bit of feet above the ground floor. A small teenager would be able to reach up and just barely touch them, but the consequences of such an action would be painful.

You see, the multitude of flowers that grew upon the vines had a poisonous pollen that would promise anyone it touched a painful, slow death. It had plants and bushes filled to the brim with berries–berries that started to look good when you were hungry, yet eating them would give you terrible hallucinations until it passed from your system. And then there were the Insects, creatures that were small and light; one wouldn’t notice them until they had already delivered their fateful bite. A bite which has been known to end in amputations at best, and at worst…

The only thing you could touch without some type of harm befalling you would be the moss that covered every inch of the forest floor. It was soft to the touch, a dream to walk on barefoot and an even bigger dream to sleep on. It lulled people into a false sense of security, most times.

Only those blasted Insects could survive.

It seemed the Forest of Aeytr, while so, so beautiful, was designed to kill all those who stepped foot into it.

But, despite that, there was a young child standing on the edge of the forest, peering into the shadows. She painted quite the picture, with a tattered dress hanging from her frame, dirt and blood smudged around her knees and elbows, a scrape on her face.

A yell pierced the air, and she gasped, blonde unruly hair whipping around as she turned instinctively towards the voice. Without a moment’s hesitation, she fled.

Right into the forest.

Her feet sunk into the soft moss, but she didn’t dare stop to admire the feeling.

For what seemed like hours, the girl ran. Her lungs ached so fiercely she almost thought there were scrapes inside of them; her legs cramped, forcing her to drop.

Thankfully, she had managed to avoid anything too dangerous, she was still alive after all. But she feared what would happen if an Insect came along and thought fit to make a meal of her.

She curled up into the moss, sinking a few feet into it. She strained her hearing, and met with silence, she relaxed. There were worse things out there for her, things worse than the dangers of the Forest of Aeytr.

She heard something shift behind her, she whirled, heartbeat spiking-

There was nothing. Still, she kept hearing that same shifting sound, like cloth on cloth, and kept turning to face it. Her breathing picked up. She couldn’t see anything; the shadows were too thick.

“What do you want!” She tried to yell, but it came out small, shaky.

Finally, something stepped out of the shadows.

Or, rather, someone. A boy.

He was thin, underfed, with an old shirt hanging off of one bony shoulder, and thick shorts held up tightly by a string. There were small bottles on strings hanging from his ears, and they were glowing, casting an ominous light. His feet were laced with multiple thin, white scars almost as if he had walked carelessly through a thicket of thorns. Her gaze travelled to his face, which was hidden by a mop of curly, bronze-red hair.

She stopped breathing when he shifted, his hair falling out of his face. Her blue eyes met his–dark eyes that reflected the light from his earrings. They were filled with curiosity, and a hint of wariness.

She blinked as he took her in, eyes lingering on her bloodied cheek and dirt-stained dress. Then he gave her a smile; mischievous, open, as if they were sharing a secret nobody else knew about.

Then he dashed off, slowly, looking back every now and then, as if he wanted her to follow him.

The girl hesitated, looking back the way she came, looking at all the deadly things around her. Did she really want to go deeper? The wounds on her body throbbed to the time of her heartbeat, furious and fast. It was enough to urge her forward, to follow the lights of his earrings deep, deep, deeper into the Forest of Aeytr.

When the boy finally stopped, so did she, staring in awe at the place around her.

There was a small dip in the ground, a clearing shadowed by branches, bare branches devoid of any dangerous vines. Instead, what was hanging from them were tiny glass flowers that glowed all kinds of soft colors. When she looked at the boy, his dark eyes were on her, and the way they reflected the lights around her made her breath catch in her throat.

She never wanted to leave.

He didn’t speak, merely walking around his little divot in the ground, reaching into the moss and bringing out strange objects before pausing, putting them back, and moving to a different spot. It was such a strange sight that the girl almost considered that she was dead and had never really gone to the forest at all.

Eventually though, he seemingly found what he was looking for, sauntering over to her with two bottles, one smaller than the other. Inside the bigger one was an Insect, inside the other was a liquid that looked kind of like honey, but watered down. She furrowed her eyebrows, a panic welling up inside her chest. But the lights and his eyes kept her calm, as if in a trance.

“You don’t belong here,” he spoke for the first time. If she had had to guess, she would have thought his voice would be smooth and deep, despite his prepubescent appearance, yet his voice was airy and light. It woke her up from her trance, but she didn’t startle or try to run away. She was too busy listening.

“The forest is dangerous, child,” he tucked a strand of hair behind her ear, thumb stroking the blood from her cheekbone. As he looked at the red stain, a sad understanding passed his face.

“I see,” he murmured. Then he pressed the bottles into her hands. “The Insect will take care of whoever is harming you; all you have to do is smear the honey-water on them.”

Her mind connected the dots, her eyes watered, a sob caught in her throat.

“Shhh, shhh, child.” He guided her head to lay against his chest. “It will be alright now.”

Then he pulled away and caught her eyes one last time. His eyes expanded, black smoke making the world disappear.

There was a young child standing on the edge of the forest, peering into the shadows. She painted quite the picture, with a tattered dress hanging from her frame, dirt and blood smudged around her knees and elbows, a scrape on her face.

“There you are,” a gruff voice barked. She jumped and scrambled to face the owner of the voice.

He stepped forward, a hand clamping on her neck harshly.

“Let’s go home,” he said, deceptively soft, despite the way he squeezed painfully hard. “Your mother won’t be pleased we stayed out so late.”

Her hands shook, and she almost dropped the bottles she had been given. As she concentrated on keeping them in her grip, she distantly wondered when she had acquired such strange bottles.

The fear at noticing the Insect that lied in one of them kick-started her memories. She froze, stumbling when her father just kept pulling her along.

She looked up at him, and then down at the bottles. And then up again, and down.

She slowly, silently opened the smaller bottle; carefully, oh-so-carefully smearing the honey onto the hand holding her captive. When she looked back at the forest, she saw two glowing orbs hanging in the shadows, and two eyes that reflected their light. She could almost imagine that he was supporting her, encouraging her to do what she had to do.

She closed her eyes, and opened the other bottle.