Young Democrats of Cartersville Club is Ready to Make its Mark 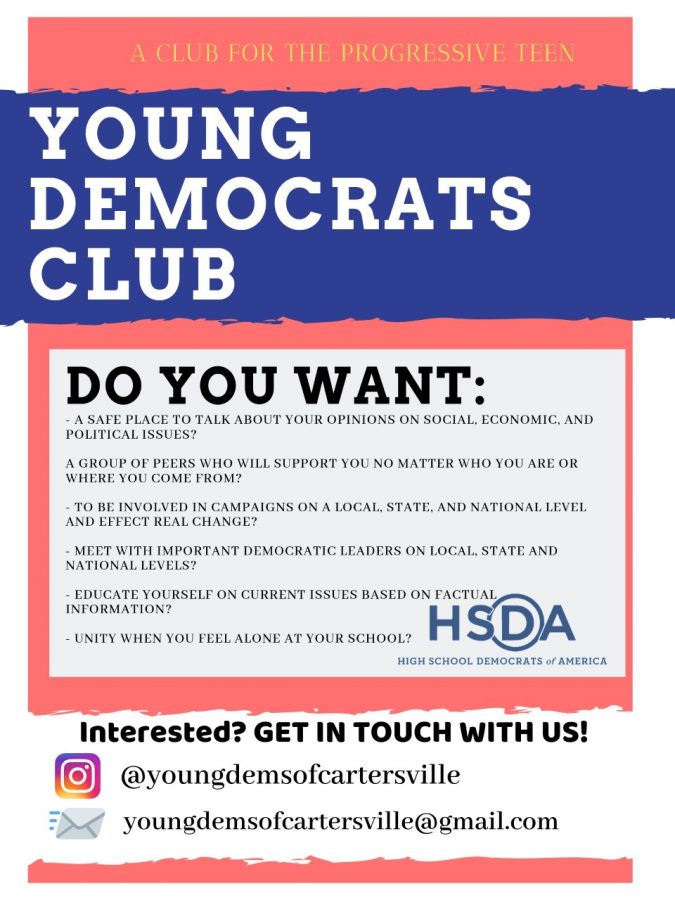 This year, Young Democrats has returned from a nearly 10-year hiatus. Jenny Crum sought advice from Mrs. Templeton on how to get the club back on its feet and was directed to Mrs. Candela, who was immediately intrigued by the idea of sponsorship. She felt it was important to give a voice to the under-represented, and considering the voting results of recent elections, Democrats are surely under-represented in the Cartersville area.

With Mrs. Candela’s sponsorship, Jenny Crum and Juliana Hartley were able to start the club. When asked why she wanted to bring the club back, Jenny’s answer aligned with Mrs. Candela’s and explained, “Young Democrats Club welcomes all people who are accepting of others.”

She too felt that there was an immoderate number of students who lacked a voice or safe place to discuss their thoughts and feelings on a variety of topics.  The world has become a place where many have received ridicule for their political beliefs or hate for their appearance or lifestyle.  Jenny, Juliana, and Mrs. Candela all want to make sure everyone has a safe place to feel valued and connected.

The club gathers every other Tuesday morning at 7:50. The meetings are accepting, focused, and thought provoking. Jenny and Juliana help lead each meeting and have helped establish goals and ideas for service and volunteer projects.

Like many other clubs, Young Democrats wishes to reach those in hardship by raising money and supplies. One of their main goals is to go into the community and lend a hand. Their goal by the end of this year is to have done at least three service projects, if not more.