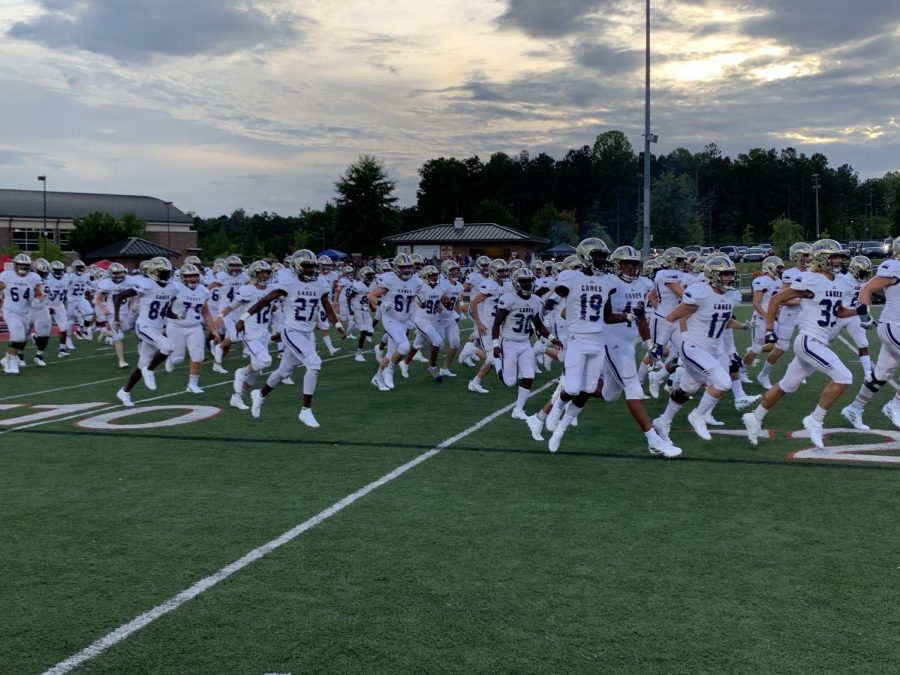 On Friday, August 23, the Cartersville Purple Hurricanes defeated the Allatoona Buccaneers 14-13 in a thrilling season opener. Both teams’ defenses showed up in a major way, as neither team could find any consistency on offense.

Cartersville’s first possession was uneventful and the Canes were forced to punt after two incompletions by Tee Webb.

On Allatoona’s first possession, senior defensive tackle La’Kwayme Jupiter ate up a pitch to the running back for a loss of yards to force the Bucs’ first three and out.

Tee Webb threw an interception on the next possession with 6:40 left in the first quarter. Allatoona took advantage of the good field position and took the lead after making a 54-yard field goal to go up 3-0.

Cartersville’s third possession ended just like the second, with a turnover. With 3:03 left in the first, the Canes fumbled and Allatoona recovered. On 3rd and 11 with 11:50 left in the second quarter, Amarai Orr sacked the Allatoona QB for a loss of 11-yards. The Bucs attempted a field goal, but missed.

Allatoona made a 42-yard field goal and took a 6-0 lead into halftime.

Cartersville’s biggest play on offense came in the third quarter as running back Quante Jennings scored on a 98-yard touchdown to give the Canes a 7-6 lead.

Late in the third quarter, the Buccaneers converted on fourth down near the goal line and then punched the ball into the endzone on a 2-yard rushing touchdown to take a 13-7 lead.

With a minute and a half left in the game, still down 13-7, Cartersville needed to score or they would start the season off with a loss. On 3rd and 4, Tee Webb completed a pass on a slant route to junior wideout Sam Phillips, who proceeded to score a 59-yard touchdown, giving the Canes a 14-13 lead.

The Canes sealed the victory with 1:23 left as Devonte Ross stripped an Allatoona receiver and Marquail Coaxum recovered the fumble. Against all odds, the Canes came back and rose victorious.

Cartersville’s defense was spectacular, only giving up one touchdown all night. Amarai Orr had a tremendous game, picking up three sacks.

Next week Cartersville takes on Luella as they look to start the season 2-0.