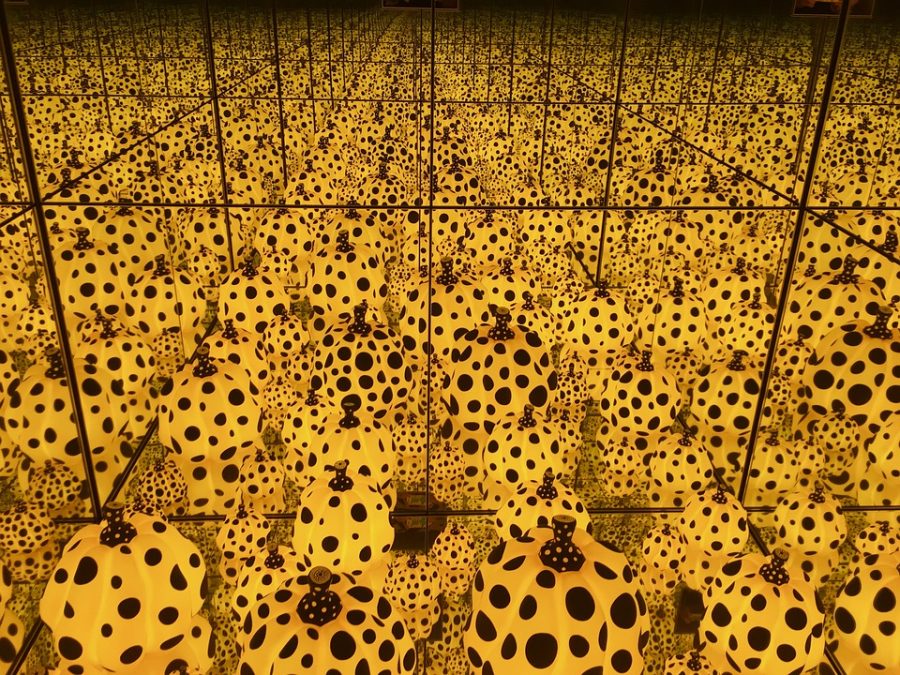 Have you ever seen a never-ending portrayal of reality in the reflection of a mirror? Have you ever seen a series of dots in close succession and become hypnotized by the sight? Are you intrigued by artists who use their work to make political statements?

Yayoi Kusama enraptures the mind and the eyes by utilizing all these things. Characterized in her mature work by a motif of repetitive dots and her iconic Infinity Mirrors installations, Kusama was inspired by American impressionist abstraction and her own personal experience with childhood hallucinations. Her work includes early paintings utilizing lines and shadows and later paintings with her signature motifs, soft sculptures of small tubular structures, and of course, her famous mirror rooms.

In these mirror rooms, Kusama uses mirrors to portray an infinite reflection of the contents of the rooms. The rooms contain some of Kusama’s own sculptures, like her well-known All the Eternal Love I Have for Pumpkins, which features dotted, glowing pumpkins in an endless landscape. Others use lights to their advantage, like At the End of the Universe; this room darkens and lightens the softly glowing paper lanterns overhead, the enveloping darkness giving the impression of endless space.

In the middle of working on her works with traditional mediums, Kusama expanded her work into the world to serve as antiwar and free-love commentary. These displays were often self-proclaimed by Kusama to have the purpose of dismantling the boundaries of identity and sexuality, tending to involve public nudity.

In 1973, Kusama moved back to Japan and voluntarily lives in a psychiatric hospital. Last year, she opened a museum in Tokyo dedicated to her work, but her paintings, sculptures, and mirror exhibits still make their way around many museums in America.

The High Museum of Art in Atlanta is holding one such exhibit through February 17. The exhibit shows Phalli’s Field, her first mirror room, Love Forever, The Souls of Millions of Light Years Away, Love Transformed into Dots, Aftermath of Obliteration of Eternity, and All the Eternal Love I Have for Pumpkins. The exhibit also includes commentary from Kusama on her works, as well as her paintings, sketches, and records of her public art. The experience ends in The Obliteration Room, where you cover an initially blank area with furniture and objects with colorful stickers of different sizes. The dots serve as the least common denominator, bringing everyone together with a common objective—to free the room of its expected role with color.

Unfortunately, pre-ordered tickets are sold out, but walk-up tickets are still being sold in the early morning, with lines forming long before the office opens. The success of the exhibit just goes to show Kusama’s success and influence as one of the 21st century’s many artists.