The Curtain Rises on the Theater Department 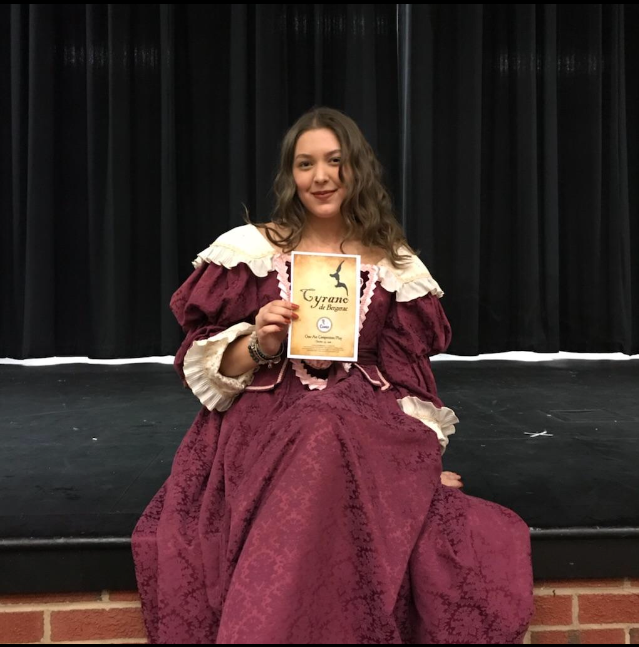 Roxane, played by Alexia Stearns, poses with a program.

The show is about an unattractive nobleman named Cyrano who has fallen in love with a beautiful woman named Roxane; however, she is in love with another man named Christian. When it comes to talking to women, Christian isn’t the wisest, so he seeks advice from Cyrano, who then gives him beautiful words to help Roxane fall in love with him. When Christian passes away, Cyrano refuses to tell Roxane that it was truly his words all along, which is the real tragedy of the play.

When asked, sophomore Kevin Barnhart (Cyrano), says he likes being on stage because he enjoys expressing himself and being able to be someone else while still being himself. In preparation for his role, Kevin thought about where his character is in the world and how Cyrano views life. “I took on this role of Cyrano just by becoming who he is.”

The eleven cast members of this production did an amazing job performing while also constructing the set on stage in between scenes.  The next day, October 28th, the cast went on the road to their competition, where they placed fourth in the region.

This was Diana Long’s first production at CHS this year. After the show, the cast surprised her with flowers and a card to welcome her and to thank her for an amazing show. Upcoming shows to be on the look for are Elf the Musical, Jr. on December 8th, Junie B. Jones for the spring children’s show, and Hairspray, also in the spring. (Dates for Junie B. Jones and Hairspray are to be announced at a later date.)