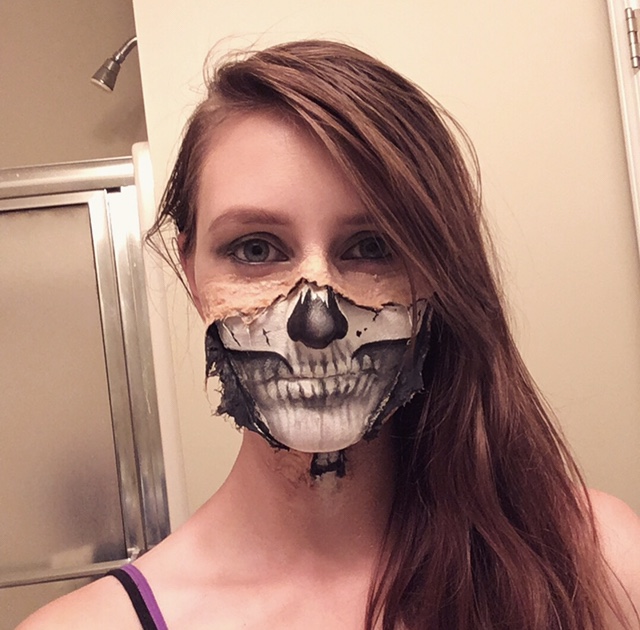 Special effects makeup, commonly known as SFX makeup, is most known for its use in cinema. Many people are familiar with behind the scenes shots of actors in the makeup chair, in various stages of their transformation into whatever character they portray on TV or in a movie, like Deadpool, the Joker, or Voldemort. This type of makeup is also used frequently in haunted houses, Halloween events, theater, and disaster drills (called moulage). SFX encompasses everything from the things you find at pop-up Halloween stores to body painting to heavy contour to full face or body transformations into something otherworldly. SFX also frequently bleeds—no pun intended—into beauty makeup, as the line between the two is a hazy one.

On the less complicated end, SFX can be used to create bruises, small cuts, scrapes, and the like. These things usually make up the components of larger, more complex looks and are often made using simple tools like makeup brushes, sponges, face paint, scar wax (an easily malleable wax often used to sculpt cuts or specific trypanophobia looks), or latex. These are the kinds of things that are usually used to make the kinds of looks you’d find on Instagram under the #SFXmakeup tag and are often to be found in pop-up Halloween stores.

A world of opportunity opens up once you have the basics down. Some products have a higher learning curve but produce better results, like FX gelatin (and no, it’s not food. You don’t want to eat something that’s a third glycerin and smells like “a New York City subway filled with baby diapers,” to quote Glam&Gore on Youtube), silicone/third degree (a two-part solution known for its versatility and realistic results), prosthetics (an implement usually made out of gelatin, silicone, latex, foam latex, or cold foam used to change the look of one’s body by gluing the prosthetic to the area you wish to change), or professional 99% alcohol-activated paints, such as the palettes from Skin Illustrator or Ve Neill. Often these products are used for out-of-kit looks that require little prep and can be done straight onto the face, but, as they’re just components, they can and often are utilized for more difficult looks.

The professional world is where looks require molds, days of prep work, and sometimes multiple people. For this level, most SFX artists prefer to have a life cast of their subject’s face if multiple prosthetics need to be made. A life cast is made with plaster to give a 3D model of your subject’s head and face and helps to ensure prosthetics are the appropriate size and shape for their face. Prosthetics can also be designed to go on nearly any other part of the body, and some jobs even require full bodies for scenes. For example, (small spoiler warning) in Marvel’s Netflix series The Punisher, the sixth episode required a full body dummy for a scene where they cut into Frank Castle’s shoulder to remove an arrow head, since they obviously couldn’t cut into an actual person. Tricks like this are common in the SFX world, especially for things called blood gags, where usually live shows (like Universal Orlando’s Horror Make-up ShowTM) or smaller-budget productions use cut-out knives or cheap, small bags of fake blood to create a real-time illusion of a gruesome scene.

Unfortunately, the deeper you get into it, the more expensive and harder to find your materials get. Gelatin is an exception because all the ingredients can be found at a supermarket for under $20 at the high end, depending on how much you need to make. Otherwise, things like professional alcohol-activated paint palettes, third degree, higher end prosthetic transfers (a good alternative for those allergic to latex, as they’re made of adhesive, usually Pros-Aide, and apply like temporary tattoos), or even good quality latex can run upwards of $50 and even into thousands of dollars for professional gigs. This means many SFX artists tend to lean towards tricks and alternate, more creative options to avoids such costs, since most artists live gig to gig wherever they get hired.

While SFX is generally more respected as a profession than purely beauty makeup, most people are still unaware of the difficulty of the job. Besides the general costs artists put into their own personal kits aside from specific projects, the profession often requires years of practice, mentorship, and many are certified or have attended classes for things they want to improve in. Artists spend hours on set, coordinating with directors, producers, and costume designers to create extremely realistic—sometimes surreal—characters. One of the best examples of this is Ve Neill’s collaboration with Tim Burton. Left to her own devices after attempting to work within his ideas, she created the iconic look of Beetlejuice.

SFX isn’t overwhelmingly difficult to learn, but it’s important to do things properly. Some products, if applied or removed improperly, hold the potential to cause skin irritation or even permanent damage. Artists on set are vigilant about the well-being of their subject, often doing patch tests for potentially dangerous materials on the inside of a wrist.

Halloween may have already passed, but for SFX artists, Halloween is way of life. We live for the creepy and illogical, and if we can make a living out of it, all the better.