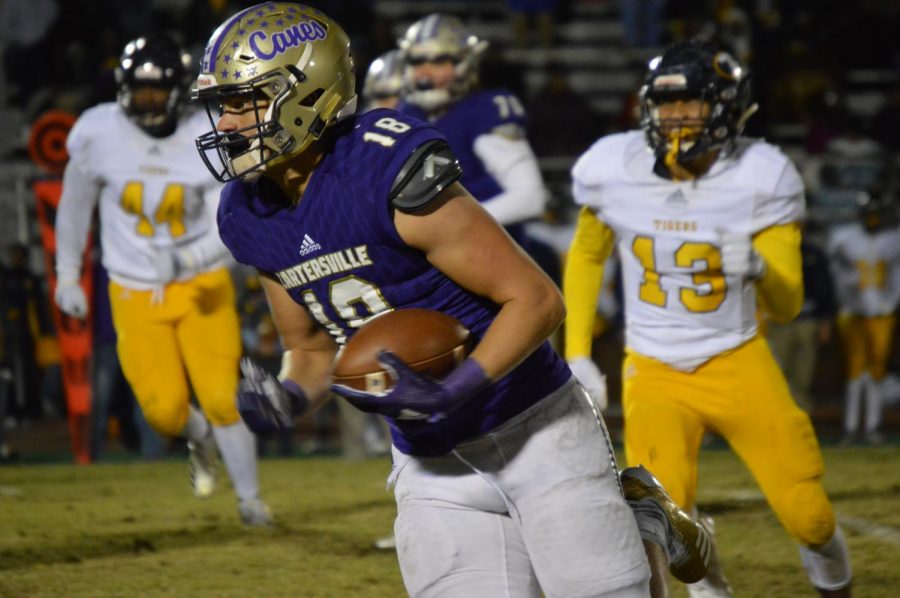 On Friday, November 2nd, the Cartersville Purple Hurricanes defeated the Troup County Tigers by a score of 43-10, securing the region title.

The Canes came out on fire with a 77 yard touchdown run by senior running back Marcus Gary on the first play from scrimmage. The defense responded to the offense’s hot start when sophomore defensive back Amarai Orr picked off Troup County quarterback Kobe Hudson, returning it for a touchdown and pushing the lead to 14-0. It had only taken 1 minute and 15 seconds.

On the very next drive, Troup bounced back from the interception and drove downfield to hit a 36-yard field goal. After trading short drives, Cartersville scored again on a 54-yard bomb by junior quarterback Tee Webb to sophomore Devonte Ross. Ross beat his man on excellent route running, and Webb made a beautiful throw to put the Canes up 21-3 at the end of the first quarter.

The Tigers drove down the field on their first possession of the second quarter and elected to go for it on 4th down and short. The Hurricane defense proved tough, though,  shutting the conversion attempt down.

On the next Cartersville possession, Tee Webb hit 4-star tight end Jackson Lowe on a seam route in the middle of the field for a 20 yard touchdown. The Canes went into the half with a 28-3 lead.

Cartersville kicked off to the Tigers to start the 2nd half. Junior Mark-Anthony Dixon provided some life for Troup and returned the kick to the Cane’s 20 yard line. Troup scored on an 8-yard rushing touchdown. The score would not go unanswered.

With about six minutes left in the 3rd quarter, Tee Webb hit Jackson Lowe, yet again, on a 28 yard pass to the 5 yard line. Webb finished the drive himself, scoring on a rushing touchdown.

The next possession found Troup County pinned in their own endzone as the Canes’ D got what should’ve been a safety. Defensive ends Bobby Harris and Isaiah Chaney got in the backfield to drag the quarterback down, but the quarterback threw the ball on the turf at the last second. With no receiver in the area, it should have been called intentional grounding in the end zone and resulted in a safety, but the referees called it an incomplete pass.

In poetic justice, the defense got their safety on the next Troup County possession, thanks again to senior defensive end Bobby Harris.

Tee Webb threw a pretty ball to senior wide receiver Kaleb Chatmon, and Chatmon made a spectacular catch over a Troup defender for 37 yards. With 1 minute left in the 3rd quarter Marcus Gary walked untouched into the endzone for a 13 yard rushing touchdown, the final score of the game.

The Cartersville defense made one more good play with seconds left in the 3rd quarter. The Canes stripped the ball away from Troup and  Amarai Orr recovered it to add insult to injury on an already embarrassing night for the Tigers.

Cartersville’s defense played lights out all night, stopping the run and forcing Troup County to throw the ball when they didn’t want to. Defensive ends Bobby Harris and Isaiah Chaney were influential in the Hurricane’s game plan, and sophomore defensive back Kolbe Benham played well in place of injured starter, Marko Dudley. The Cane’s run game was phenomenal with Marcus Gary racking up 149 yards rushing and 2 touchdowns. Quarterback Tee Webb was impressive as well, going 8 for 16 with 185 passing yards and accounting for 3 touchdowns.

The Canes showed out for the electric Weinman stadium crowd. In the biggest game of the season, Cartersville came prepared and looked hungry to claim another region title.

The Purple Hurricanes look to continue their dominance next week in Round 1 of the state playoffs against Stephens County.