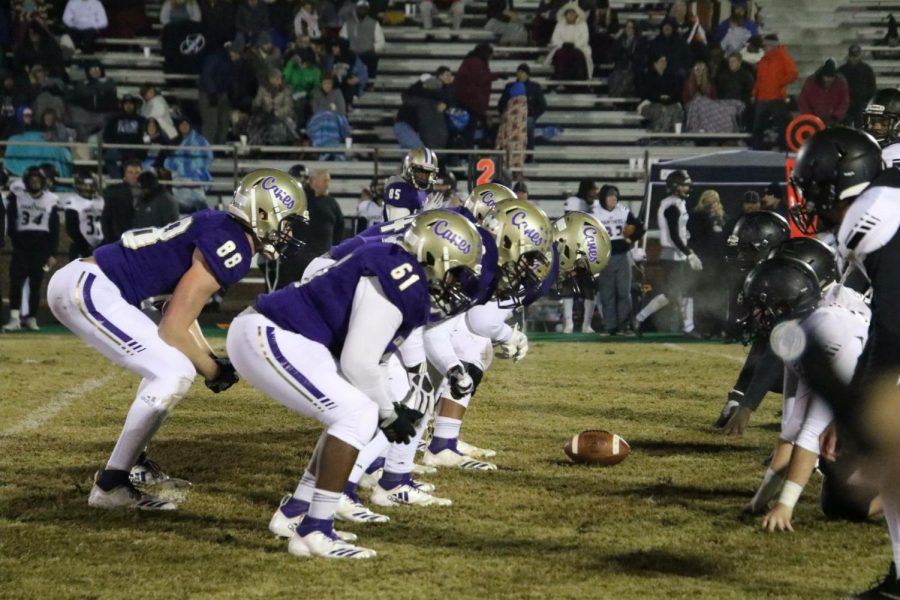 On Friday, November 16th, the Cartersville Purple Hurricanes beat the Ridgeland Panthers to advance to the 3rd round of the GHSA 4A State Playoffs.

The Canes started the game with the ball, but came up empty on a failed fourth down conversion attempt. Ridgeland’s troubles began immediately as they fumbled the ball on the ensuing drive, with Cartersville sophomore Devonte Ross recovering.

The turnover allowed the offense to cash in on the following drive, with good running by senior Marcus Gary. After some big gains, Gary pounded it in on a 5 yard touchdown. The turnovers would not stop for the Panthers. On the very next drive Ridgeland quarterback Nathan Carver threw an interception to junior safety Marko Dudley. With about two minutes left in the first quarter, wide receiver Dadrian Dennis took a screen pass 30 yards for a touchdown.

The Cartersville D continued to play lights out through the second quarter, with big plays by senior linebacker Sunni Moorehead and senior defensive end Isaiah Chaney. The Canes’ offense scored twice more in the half on back-to-back drives.

Tee Webb threw a beautiful pass to tight end Jackson Lowe for a 30-yard touchdown, then Marcus Gary followed it up with a 12-yard touchdown run. Cartersville drove the ball down the field after an empty Ridgeland possession, but Tee Webb threw an interception to cornerback Stephon Walker in the red zone.

With seconds left in the half, Ridgeland quarterback Nathan Carver threw a Hail Mary in hopes of a miracle. Instead, it was intercepted by junior cornerback Marquail Coaxum as the clock hit zero.

The Hurricane defense came out on fire again, forcing Ridgeland to punt on the first drive of the second half. Marcus Gary had a 44 -yard run on the following drive, but the Canes turned the ball over in another failed fourth down conversion attempt.

Ridgeland’s offense continued to struggle, as they were forced to punt after a huge deflection by Devonte Ross brought up yet another fourth down. Penalties by the Panther’s defense cost them on the next drive as they gave up 30 yards due to two personal fouls.

Blessed with incredible field position after the penalties, quarterback Tee Webb threw a 24-yard touchdown pass to his favorite target for the night, tight end Jackson Lowe. The Panthers continued to get embarrassed offensively with Nathan Carver throwing his third interception of the night to senior linebacker Sunni Moorehead, who returned it 44 yards for a touchdown.

Ridgeland finally decided they had had enough and made the decision to put senior Tanner Hill in at quarterback. Hill had a flash of greatness as he eluded two Cartersville defenders in the backfield and threw the ball off of his back foot to senior Azavier Blackwell for 58 yards.

But then, all chances for a Panther comeback ended with an interception on the next play by sophomore safety Evan Slocum. Both turnovers and penalties ultimately hurt the Panthers. Many of their players received unnecessary roughness calls for shoving Cartersville players after the play was dead.

With under a minute left in the third quarter, Jackson Lowe scored his third touchdown of the night on a 4-yard pass from Tee Webb.

Cartersville took the starters out of the game during the fourth quarter and Ridgeland quarterback Tanner Hill threw a 23-yard touchdown to Jordan Hugely, making the final score 41-7.

The Canes played a phenomenal game. The defense played lights out, preventing a single Ridgeland first down for the entire first half. Offense was equally effective. Tee Webb threw for 203 yards and 4 touchdowns, with Marcus Gary accounting for 176 yards and 1 touchdown.

The Canes played incredibly and look to do the same next week as they travel to Baldwin High School.