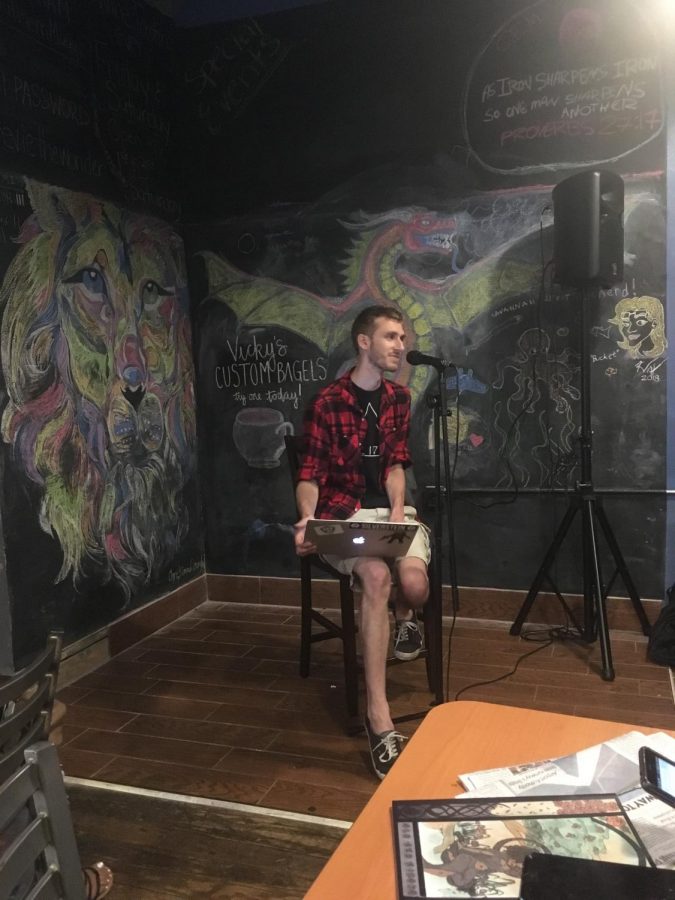 As many current or previous students of Mr. Matherne, a 10th grade English teacher, might know, a creative writing club has partnered with him to invite CHS students to read at poetry events held at Southern Muggs (commonly abbreviated as “Smuggs”) on Main Street. Students can hardly be blamed for being a little apprehensive about the whole thing; poetry in particular can be intimidating from the outside. To shed a little light on the event, I went to attend and report back on what it was like and why you should participate (just putting that out there).

Around 2011, Professor Jeffrey Kozee was the advisor for the creative writing club at Georgia Highlands College. They were in a similar position as The Chipper was before this year; they didn’t have consistent members and Kozee was essentially building the club from the ground up. Thankfully, he never lost his tenacity through the years it took to build it into a substantial group.

Once that had been accomplished, Kozee set out to find a suitable setting for a poetry reading. On foot, he discovered Smuggs. He met with the owner, Jennifer, and asked if she’d be interested. She said yes, and the poetry reading began in the fall of 2016. The readings were a huge success with both students and the community.

David Matherne entered the picture in 2017. Having known one of the members of the writing group, he attended one of the readings. He was excited about the opportunity it presented for his students upon hearing the invitation for readers. After reading one of his own works, he asked if his students could read, to which the answer was a resounding yes. The writing group, now headed by both Professor Kozee and his wife, Professor Julie Kozee, are in correspondence with Mr. Matherne for the readings, and everyone is welcome.

The first reading of 2018 took place at Smuggs on September 20. Those in attendance from the group included Anthony Troy DelFavero, co-president and new to the club; Emily Sharp, co-president; Tori Smith, secretary; and other members, David Gossett, Marissa Nash, and Lorenzo Caseivo. Troy read his poem “Always Choose Yes” about how he coped with depression and other mental illnesses and a few other selections. Tori read her poems “Orange” about a bad relationship, “An Awkward Proclamation of Affection” about a better, healthy relationship, and “Andromeda”, a descriptive poem about her Dungeons and Dragons wizard character. David read “False Advertising” about a failed quest for pho, a Vietnamese noodle, at impractical hours of the night and “Forest Kings” about a kid wandering through the woods. Marissa read “I’m Forgetting Why I Wrote This” specifically about a dog growing old and more generally about how time escapes us. Lorenzo read “People of the Land” about a person’s perceived responsibilities and attempt to keep things afloat.

The poetry readings are well worth the time to attend. The atmosphere is comfortable and accepting, the poems are touching or funny, oftentimes both, and the coffee is splendid. To get involved, you can contact Mr. Matherne on the English hall or email me at [email protected]

Poetry readings for the fall are on October 18 and November 15 at 6:30. Everyone is invited to participate or attend as they choose. We hope to see you there!