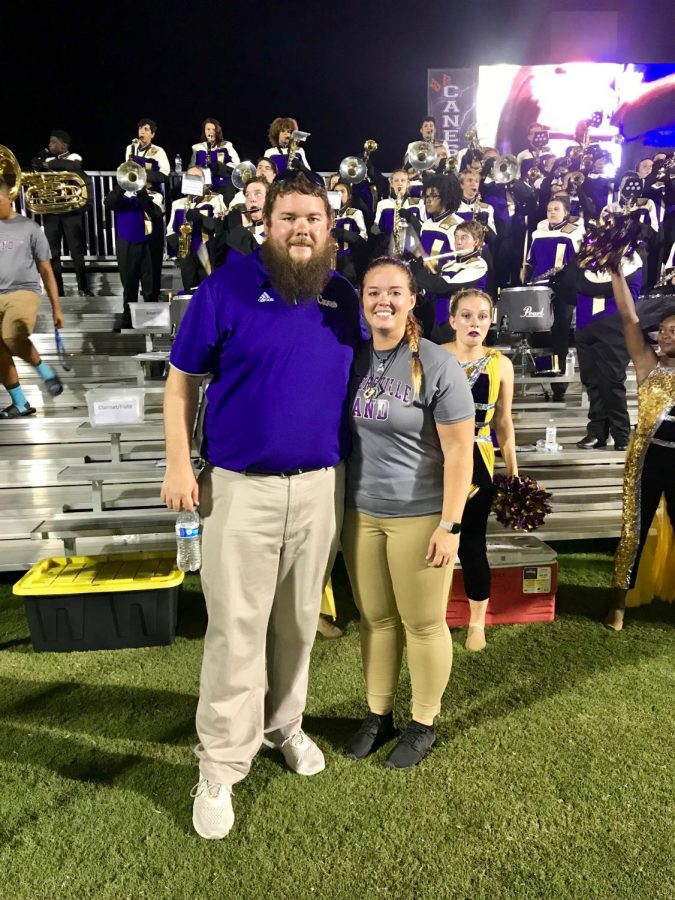 Mr. Shive, left, and Ms. Lanier, right, pose in front of the band.

CHS has a new band director, Mr. Alex Shive, an Alabama native and graduate of Auburn University. He is 25-years old, lives in Kennesaw, and is with a fellow Auburn grad.

Shive’s been working in and around bands since he graduated, even being the front ensemble coordinator for the drum corps, Atlanta Quest. His teaching resume includes Dalton Public Schools and Phenix City Schools, prior to coming to Cartersville.

In Shive’s brief tenure, he has made tremendous strides in the CHS band’s look and sound. “It’s just a completely different program now,” he responded, in answer to questions about how things have changed. “We are a lot more college-gameday-centered.”

The band previewed their 2018 show during the Cartersville-Luella home football game on August 31st. The show includes an arrangement by Brady McNeil called “400 Degrees” and the song “Stay,” by Alessia Cara and Zedd.  Shive wants the show to be less rigid and more song-inclusive, hoping to better engage the crowd.

The new uniforms likewise premiered during Friday’s game. They have a more modern, marching-band feel from year’s past, which students are excited about.

Another change that has come with the new director, uniforms, and song-choices, is the disappearance of the third-quarter break of previous years, when students would remove their coats and hats and have snacks. This change is taking some getting used to, but Shive is stressing professionalism AND fun within his band program.

It appears to be working. The band had the crowd on their feet at the end of halftime on Friday night.